Other than my brief Meg Ryan "You've Got Mail" duck-butt haircut phase in my early 20s, my haircuts haven't been too wild and crazy. Usually I keep it on the longer side. Versatility and so on.

Sometimes I think, hey, maybe I should cut it shorter for a change. Recently, I brainstormed what I might ask for at the next appointment to, you know, mix it up a bit.

Then later that week, we were getting dressed to go outside. My hair was tucked in my scarf. My observant son pipes up:

So in conclusion, at the next appointment I will be requesting the usual quarter-inch trim.
Posted by Janet at 20:46 No comments:

I went back to work this year after over 7 years at home with the kids (hence my recent lack of cartoons; I don't know which end is up these days), so the kids were off to school. I'm up at 5:30 a.m. so I can finish in time to see my boys' shining faces at the dismissal bell.

I'm always anxious to hear how their day went. What did they learn? Who did they play with? What new skill did they pick up? What new discoveries were made, what new books read, etc.?

When I was a teacher, I used to think I was doing all this cool stuff with the students, and the parents would tell me all their kid recalled about their day was that "Ms. P. is so tall, she can touch the ceiling". Well that's great, kids. I'm glad to see all that all those evenings spent prepping activities paid off.

*Sniff* you never know how the impact you'll have on a child, truly.

As for my kids, we're into April and pretty much every recap I get is entirely lineup politics.

If anything interesting happened in the day, the dismissal lineup wipes it from memory. etiquette, fairness, glory, etc. You gotta save face if you don't get your preferred spot... (That is why "First is the worst, second is the best, third is the one with the hairy chest" was invented. Keep that zinger in your pocket for the next time someone butts in front of you at the grocery store)

So that's their daily takeaway. I have no idea what they do in school. Maybe one day I'll get to hear about super cool Science experiments and new French vocabulary, but not today, I guess.

Quick! Look at these two tanks, and tell me... 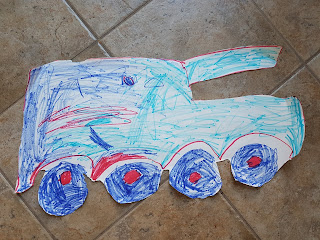 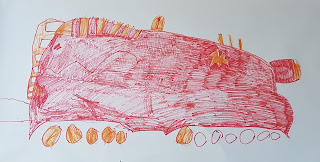 Did you say the blue one because it has a bigger cannon? Or the red one because it has a BUNCH of cannons? Is one of them the bad guy, and do you take that into account? What about which has the more mad face?... Answer fast, because there is a right answer, and the artist knows what it is.

I get ambushed daily by my six-year-old with pairs of drawings or toy vehicles or superheroes, and I get a pop quiz where I have three seconds to deduce which would win; which is stronger; which one is faster; which one is scarier. The stress!

On a related note, I see in the book orders the kids bring home that there's a whole "Who Would Win?" series. featuring various pairs of fierce animals facing off. I bet that author had (or was) a kid like mine.

When I like a song and can't make out the lyrics, I Google them so I don't make a fool of myself, even if there's no one else around to hear.

Kids, though, they'll just belt it right out whether or not their understood lyrics are even words. Oh, to have that confidence. 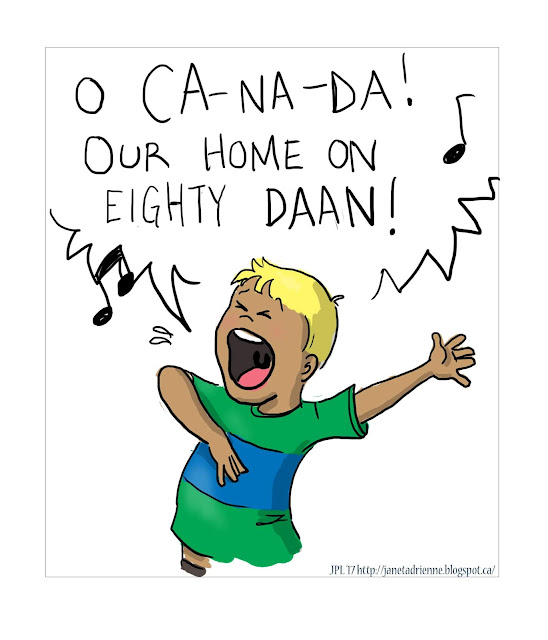 Kids love singing and music. How do you get the attention of a rowdy class of kids?  How do kids learn the months of the year, days of the week, or rituals that aren't fun but maybe are a bit if you add a song? (I'm looking at you, Barney's "Clean Up"). Songs! That's how.

(Maybe I need a song that makes a game of emptying the recycling, a la Mary Poppins. Something like 'sorting plastic something something fantastic'. I'll let you know how it goes.)

Recently, I received a copy of Eric Litwin's latest book, If You're Groovy and you Know It, Hug a Friend. As with the previous books, Litwin gets children's attention using music and repetition.

The new book features Groovy Joe, previously seen in Groovy Joe: Ice Cream and Dinosaurs, and Groovy Joe: Dance Party Countdown. Joe is interacting with his animal friends and the world around him with his usual positive outlook on life.

As with any of Litwin's books,  It's a book that a young child could easily "read", using the predictable text and Tom Lichtenheld's appealing drawings. As always, checking out the song online adds to the experience. 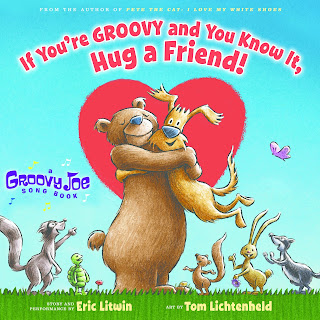 All of Litwin's books can be found here. Perfect for when the kids want to belt out some songs... and build their reading skills while they're at it. In this instance, they'll even know the words.
Posted by Janet at 20:42 No comments:

As kids, my brother and I would play that game where you put your forehead on the end of an upright baseball bat, go around it seven times and let the hilarity commence as we stumbled dizzily around the lawn. Then we'd do it again.

Now that I'm an adult, all I have to do is watch the kids spinning at the park, and I want to barf. They can whip around and around, laughing all the while, but I can't even do a cartwheel without being in the fetal position for 20 minutes afterward.

Luckily I'm not called upon to do cartwheels often, but still.

Also, might I say that nothing makes you feel cooler than commiserating with a bunch of other adults about how stuff you used to like now makes you nauseated. No more "all you can ride" bracelets at the fair for us; everything is too high or moves too much.

Meanwhile, I just have to avert my eyes when the kids get going... from the comfort of my stationary park bench. 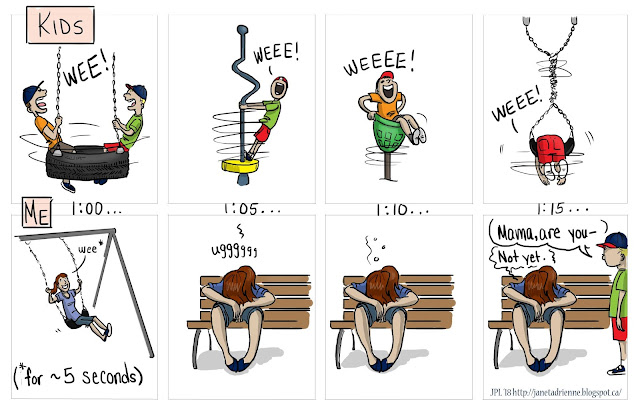 "Does anyone have any questions for us?"

That's usually what we hear at the end of a children's workshop, storytime, performance or presentation. Maybe we've just finished a tour at the Humane Society, or listened to a lovely theatre performance.

Surely the kids must be brimming with questions for the performers! Surely they want more detail on something inspiring that was just explained to them!

They are excited, alright. Excited to tell you how this all relates to their own lives.

I've taught Kindergaten long enough and taken the kids on enough homeschool workshops to know "any questions" is universally interpreted as "and now you may tell something neat about yourself that may or may not be related to the past 45 minutes". Perhaps they have the same scissors at their house! Or were a baby once! Then all their friends need to also chime in to say that, ooh ooh, they, too, were babies once! Then mayhem ensues.

Any time I've insisted that they can raise their hands only for questions, they have to get creative. 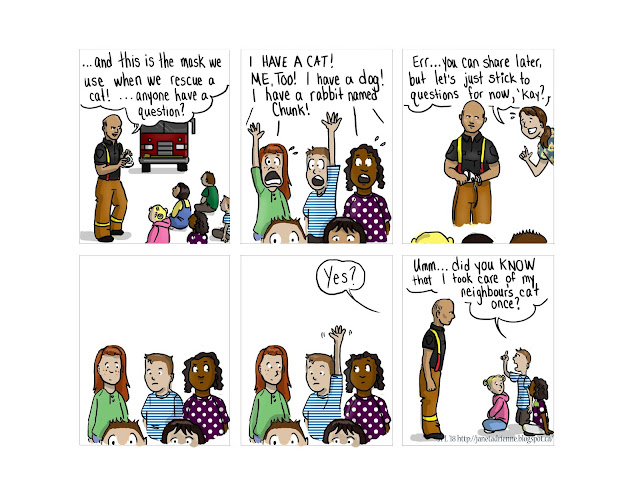 Ah well, it's a start. They're participating.

Machine de Cirque at the OICF

I was delighted to be invited for the fourth year in a row to bring my family to a show at the Ottawa International Children's Festival. This year was the 33rd for the festival, which celebrates the best in live performing arts for children.

In addition to the myriad activities for kids on the grounds, the variety of top-notch shows from around the world makes the festival second to none. This year we saw Machine de Cirque, a five-man acrobatic troupe from Québec City. The premise of the show is that they are the only people left in a post-apocalyptic world and have to survive on ingenuity and spare parts. The set includes a two-storey high scaffold equipped with trap doors, sliding panels, pulleys and trapezes. There are poles, cycles and a teeterboard as well. 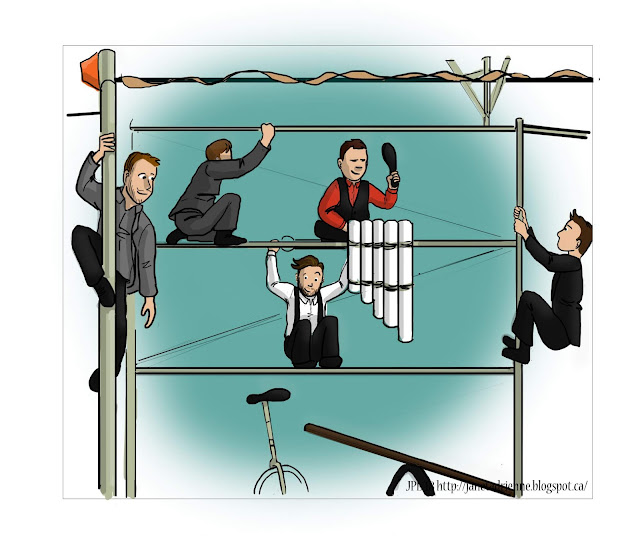 The performers climbed, flipped and held each other up like it was effortless. So many times I was thinking "I don't know where to look" because there were so many acrobatic feats being performed at once. The crowd would burst out in laughter, and I'd realized I'd missed something.

Other times I was thinking of the precision and coordination required; how any one performer's high-risk act required the other four to be exactly on cue in order to avoid catastrophe, which was stunning on its own. One false move and someone's on his face. 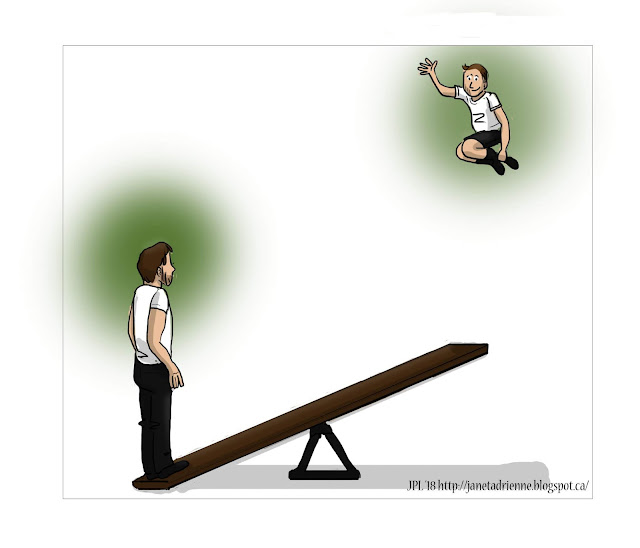 Thirdly, I had remind myself every so often that the accompanying music wasn't a pre-recorded sound track, but was actually being played by one of the performers using items like tubes, drums (with juggling pins for sticks), buckets, a keyboard (I think?) and a giant pan flute he whacked with a paddle, often while simultaneously contributing to the visual comedy. The music added to the suspense and humour.

And humourous it was. The kids' minds were blown every time they thought the consecutive unicycles couldn't get any taller, but they DID. There was also a mock date scene that involved bringing my neighbour up on stage, and let's just say I've never seen people play the roles of the stage props quite like this. (You had to be there, I think)

And then, of course, the famous towel scene. The guys all end up in nothing but bath towels, and there are a bunch of really close calls as they flip the towels, drop them, trade them and trip over each other, all while in a state of faux-panic about staying decent. I had to shush my kids from enthusiastic commentary and questions, but luckily the crowd's roars of laughter drowned them out for the most part.

It's mostly a nonverbal show, except for the odd outburst in French or the little "Tout nu, tout nu, Tout NU!" song they sing while conga-ing around in aforementioned towels. That gem stuck with my kids and is a favourite song here at home this week. Just one of the many ways these performances inspire our youth, y'know?

The show was 90 minutes long, and it held everyone's attention until the very end with its impressive acrobatics and comedic visuals. We were all so wired on the way home from the show raving about our favourite parts, I didn't know if the kids would be able to get to sleep. Another memorable year at the OICF!