The Time We Lost a Shoe at IKEA

I guess I asked for it when I decided to take the kids to IKEA. By myself. On a Saturday afternoon.

It's not the most gripping tale, but the only thing that got me through it with a sense of humour was knowing I could cartoon it later. So, here it is.
The Ottawa IKEA, I think the second-biggest in Canada, is a 400 thousand-square-foot corn maze (with inspirational room vignettes instead of the corn). It takes four separate elevators to get through. Though it's kid-friendly, you don't want to be caught with a tantruming toddler mid-store if you like to make quick exits.
"Alright, mister; we're leaving rrrright now." *Storms Through Bathrooms to Home Organization to shortcut to Home Decoration to Wall Decoration to the warehouse to the cashes and down another elevator*...

But that's not what this was about. No tantrums on this trip, yet.
So there we were in the Lighting area, near the end, shuffling through like cattle (I can't even remember what I was looking for; I keep having "cushion covers" on the list, but they're at the point of the store where the kids are nearly out of patience, so I have yet to actually stop and look at any). I was picking up the pace as Little Bro's patience tank was nearing empty. 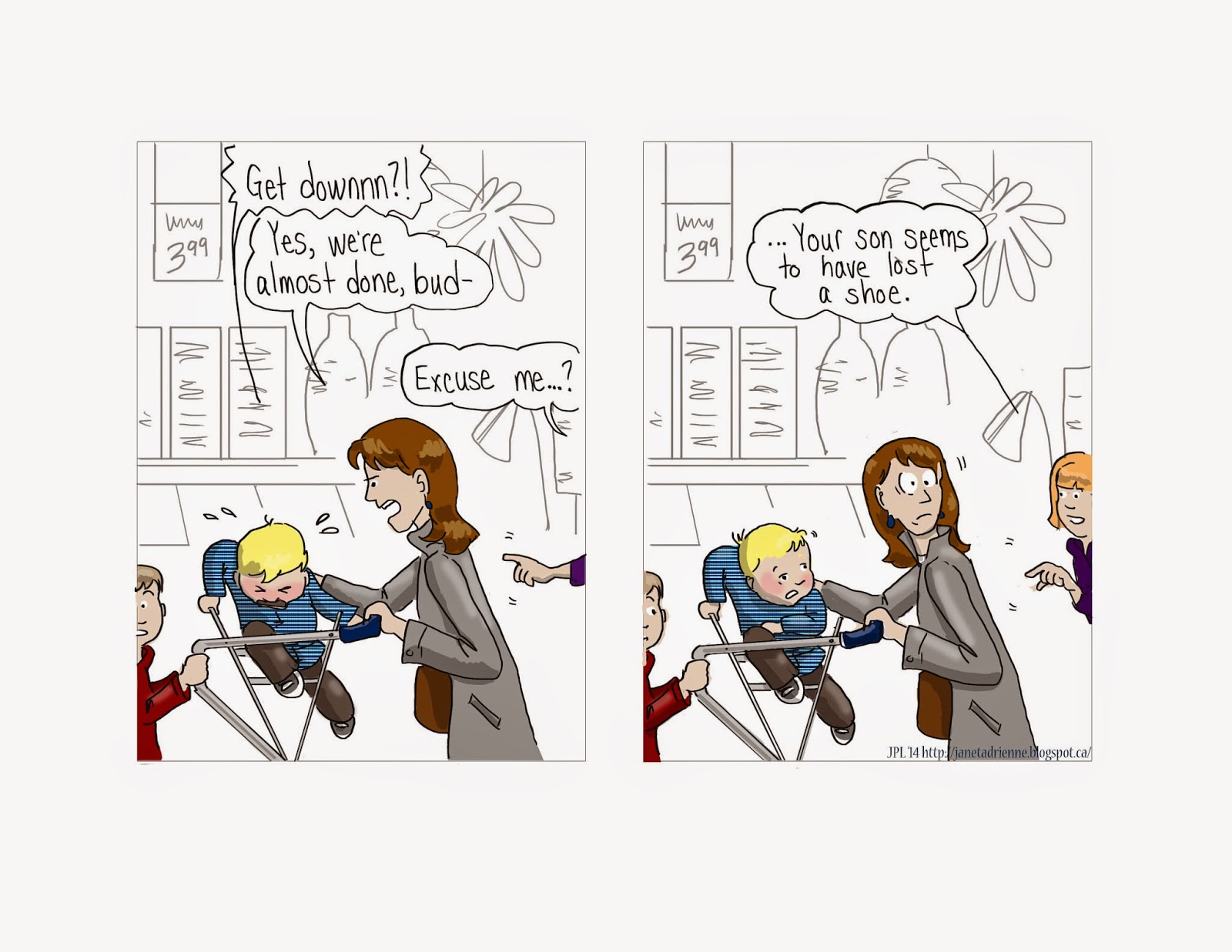 No. It can't be. You can't tell me that. Not when we're almost at the end. He would've said something if--

She must've seen the colour go from my face. These were his brand new, good-quality shoes that they sell you 2 sizes too big so they'll last for the year. IF THEY STAY ON THE FEET, I realize only now.

Big Bro wasn't any help in narrowing down where the shoe went. 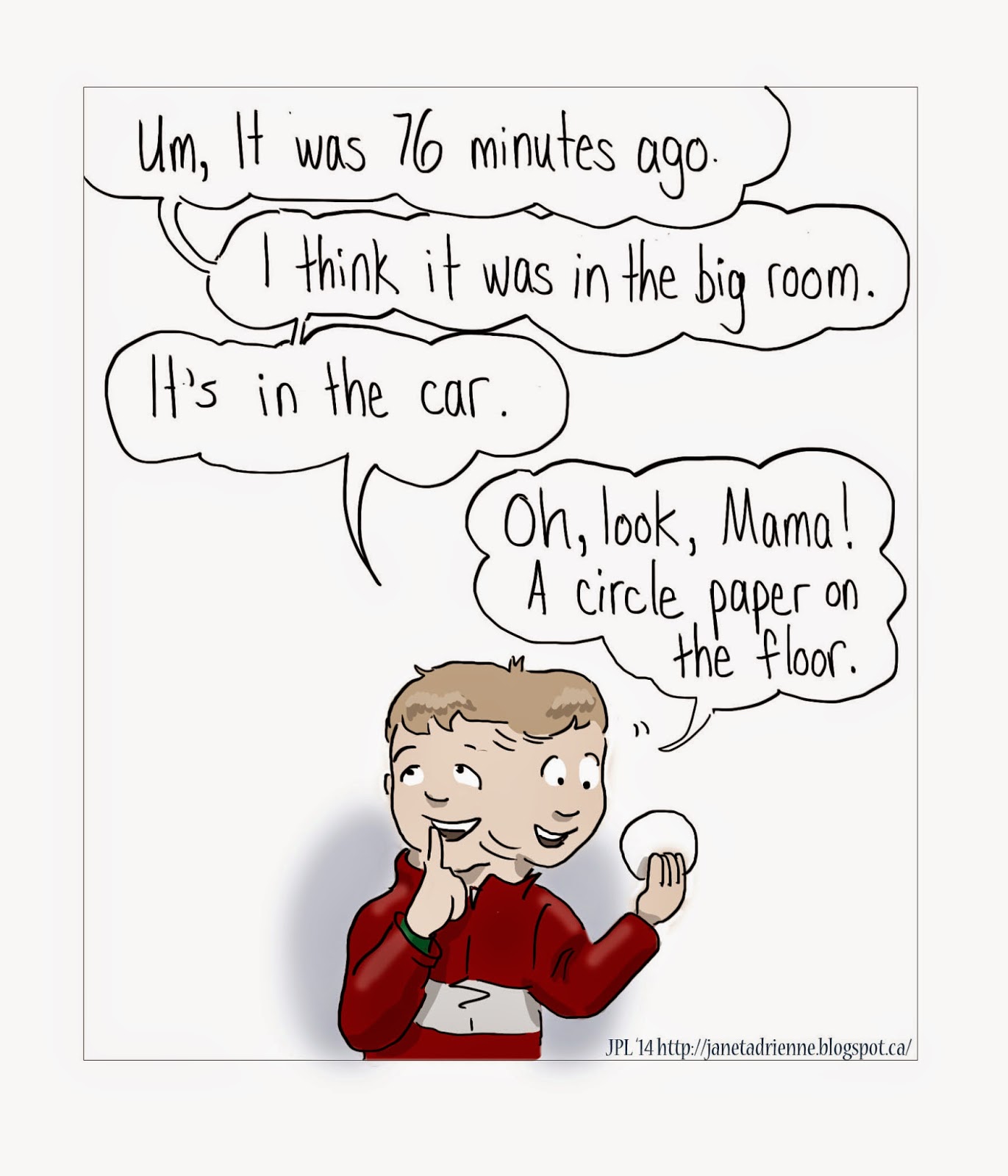 This is like that time when I found out he'd taken my wedding rings off my night table, and he offered a theatrical sweep of the arm to show me where he'd put them. "Riiiight theeeerrrre," he'd said, narrowing it down to "somewhere in the house". I was sure I'd be wearing a twist-tie in their place for the rest of my life.

But I found them, and so, I also had faith I could find this shoe in this labyrinth the size of six football fields. Just retrace your steps, right?

The only problem is, you're not allowed to backtrack in IKEA. Everyone is to flow from third floor to cafeteria, then second floor to cashes, without exception. There are even big arrows, directing the shoppers downstream, to disobey at your peril. 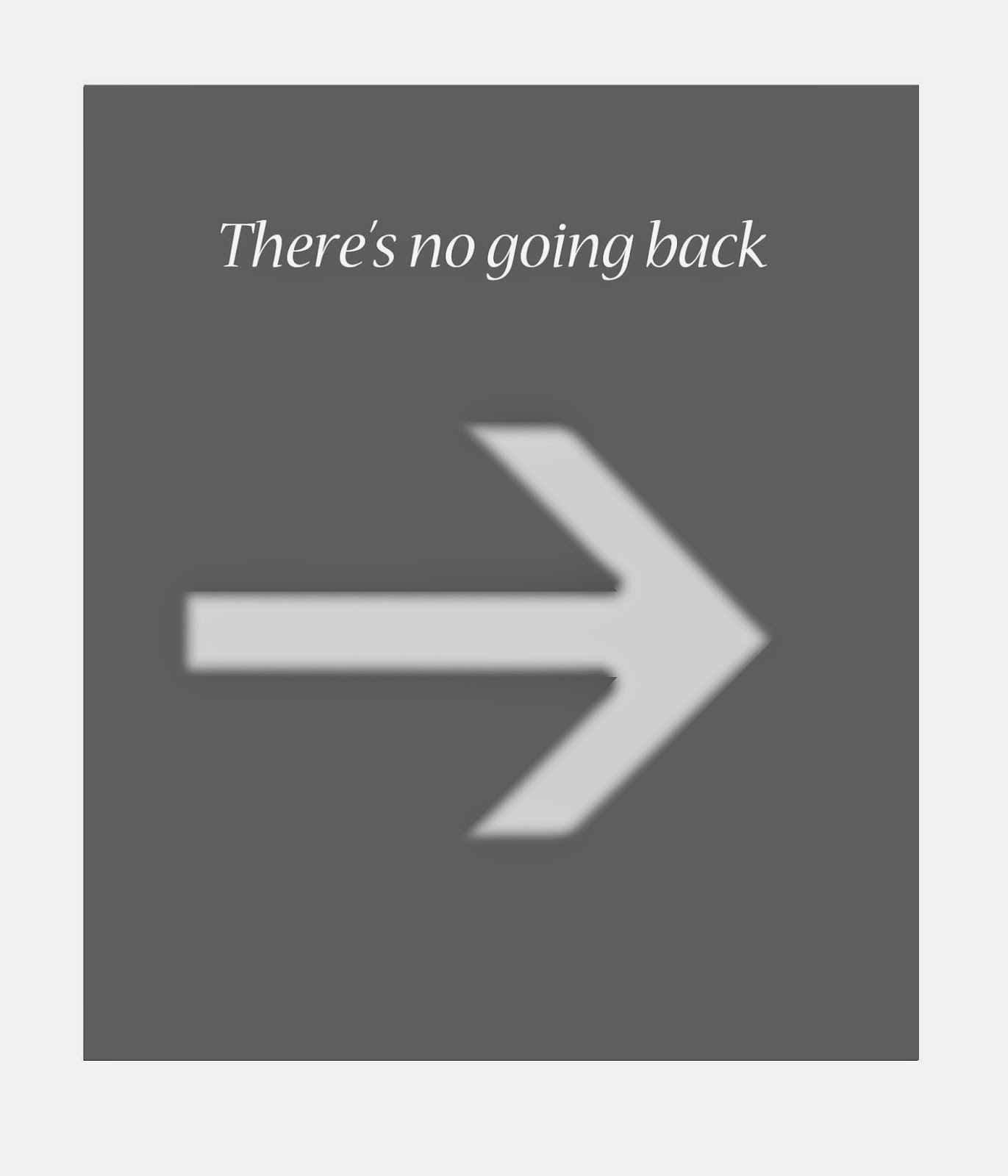 So instead I abandon the cart, tuck one kid under each arm like a football, and charge like you'd see in some sort of epic Braveheart-style battle scene through the crowd. 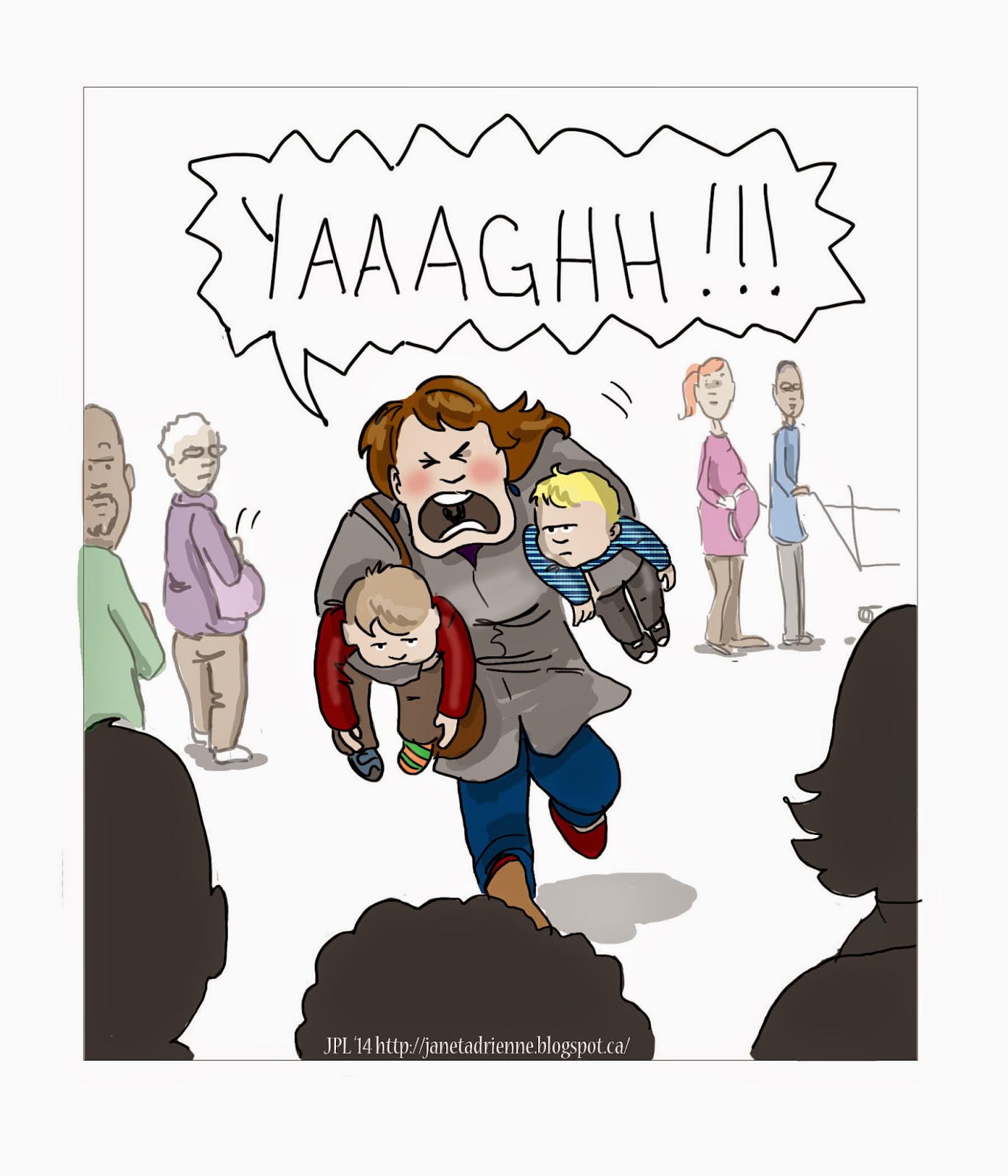 Big Bro is all smiles, guessing maybe the shoe was in the bathroom section (where we never went) or maaaaybe with the couches (at the VERY START of the store). Maybe where he was pushing buttons on the microwaves? Or maybe someone thought it was for sale and BOUGHT it, Mama? Ha ha.


I'm all hot and sweaty, navigating the "you're going the wrong way, lady" hairy eyeballs while anticipating a toddler meltdown that wouldn't have happened if we were already out, as we were supposed to be by now. More than anything, though, I'm miffed and confused that he didn't let me know. He can talk the hind legs off a mule chatting about the temperatures of all the planets and what would happen if we ate a planet and how come planets aren't people, but it didn't occur to him to say, "wait! My shoe just came off"?!

I soon realize that this is a futile effort, and anyway, maybe someone found it and turned it in. Surely no one would swipe a lone preschooler sneaker. So we crowd-surf our way back to the exit and seek out the Lost and Found.


Exasperated, I ask a staff member if it was turned in, and she warned me I might have to wait until the night crew cleans up and come back another day if it shows up. Or, I can put a bag on my kid's foot for the rest of 2014, I'm thinking, just as she returns with the lost shoe.


I'm frazzled beyond frazzled, but Big Bro is as happy as a clam. Why worry when you have someone to do it for you? Then the best was when I asked him the silly question: 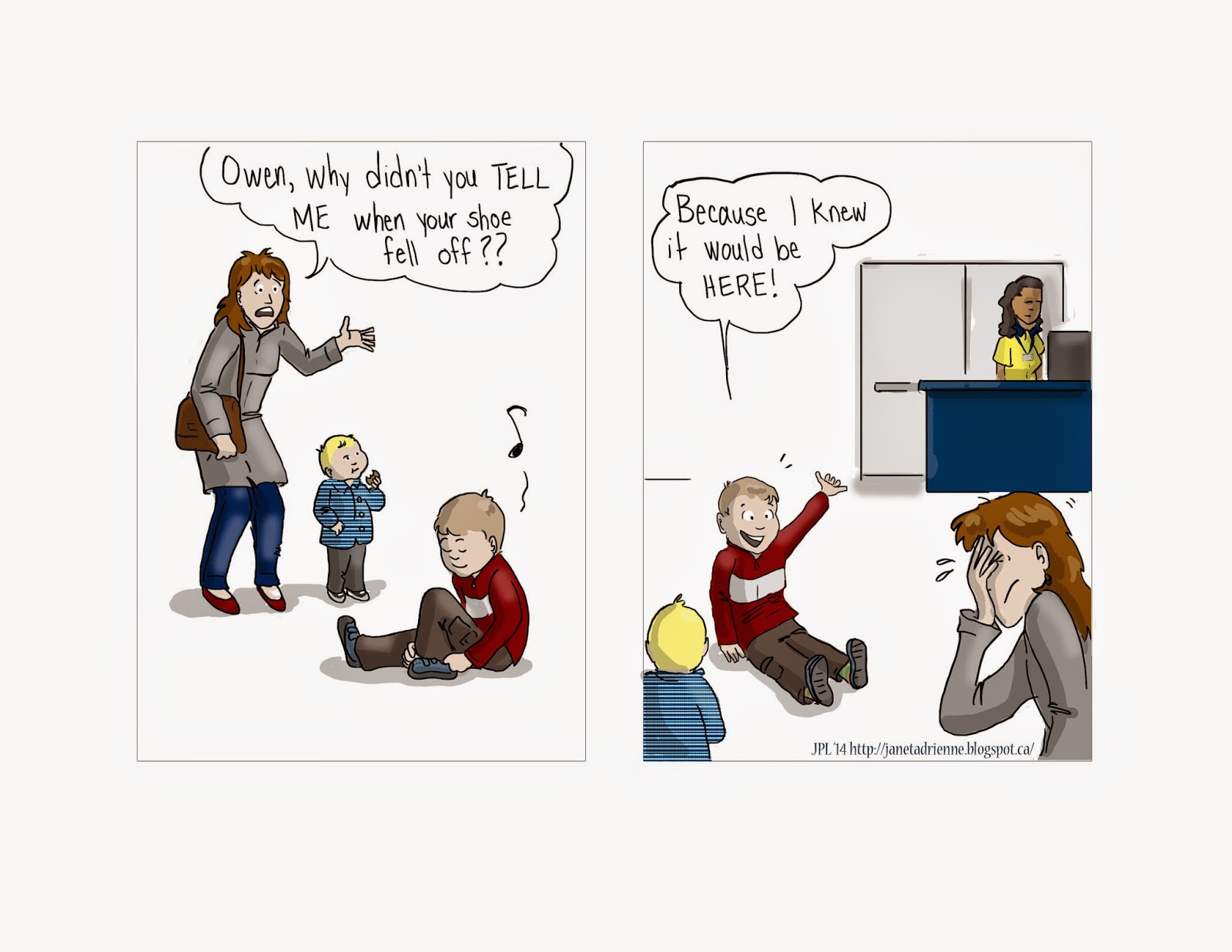 And then the following week we go to a grocery store, and he lets me know with great panic whenever he drops his precious parking lot rock. THEN he speaks up. Arrgh.
Posted by Janet at 17:23