We've sold a house before, but we didn't have two kids under five the last time.

We've been looking to move to a place that has, among other things, an outdoor space that's more conducive to being outside-- especially for the kids. When we bought our current townhouse, we were DINKs and said, "Ah, there are parks everywhere, the yard's not important." Silly DINK selves didn't consider we'd have toddlers hanging off the doorknob to get outside at 6 a.m. when it's pitch black out and we're still in our jammies, barely started on our coffee. Or rowdy kids at 4:30 who could stand to run around a bit while we're making supper. Ain't nobody going to a park ten minutes before supper.

So we found a spot in an older area of our 'burb that's closer to the city and the river and has bike paths and trees and all that naturey stuff.

Now, the challenge is selling our current house. It's a nice house, but it's been buried under a life with little kids. Plus, the teacher in me puts stuff all over the walls, like songs and calendars and word walls. It looked like a preschool threw up in here. 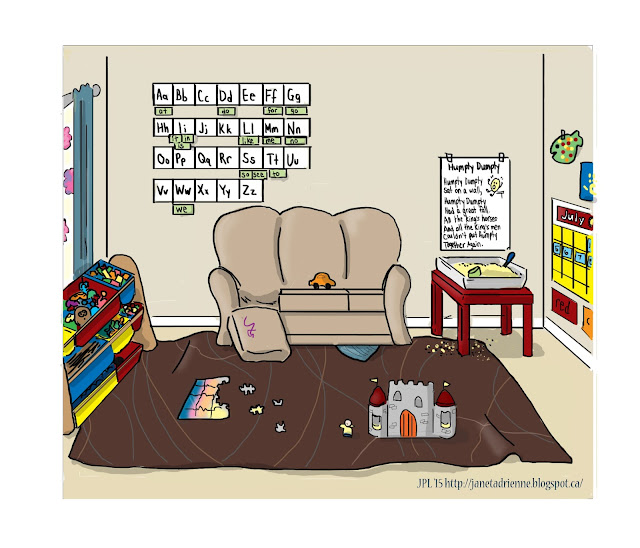 I suppose it's not a look that would make buyers come through and sigh, "Ooh, I could see myself drinking my coffee in here". So we had to get rid of a lot of stuff and get the blue tack off the walls.


So now, after much pitching and archiving and storing stuff at a friend's house, it looks like a very beige doctor's office waiting room: 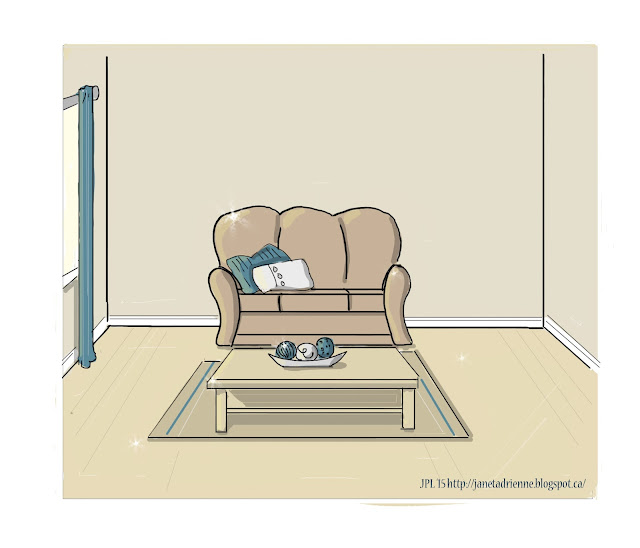 Thing is, when you stage a house, it can't just be clean and uncluttered. Maybe people have seen one too many episodes of Love it or List It or Property Brothers, but standards are high. It can't look like any biological beings, let alone kids, live there. Some staging rules include:

That means a lot of the things we use every day get pitched into storage before viewings. Big Bro doesn't understand the psychology of house staging:

"Why do we have to put the toaster away?"
"Because people won't think we have much counter space if we leave it out."
"Why can't they just know it's got space and they can put away their toaster if they want?"


"That's just not how people's minds work," I tell him.


I understand that, to an extent.The last time we were house-shopping, we viewed a house with a huge Tony Soprano poster in the living room. I couldn't quite get that "I could see us living here!" feeling with James Gandolfini scowling at us, even though, rationally, I knew he didn't come with the house.

Staging it is, then. We're up to the challenge. Fresh fruit and flowers and white spa towels to sell not just a house, but a dream. Aren't we encouraged to bake something too? Maybe for the next showing I'll pick up some Cinnabon and set it in front of a fan. It's the smell of domestic bliss!

But it's enough of a challenge to keep a house clean to your own standards with kids, let alone staging standards. Buyers want bright and airy; buyers want spa-like bathrooms; buyers want a relaxing retreat.

And so, with viewing appointments popping up with only a few hours' notice, I'm required to be pretty uptight about silly stuff I normally wouldn't give a crap about:

Thank goodness it's summer and we can at least take the kids out of the house as much as possible.

We have a few months yet, but hopefully someone buys it soon. Then we can relax a bit and actually have bath mats and trash cans again. And the kids can go back to leaving fingerprints and eating green apples with wild abandon.